Winters can be finicky! 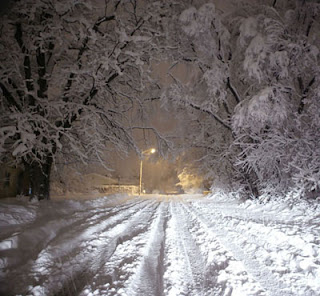 No matter where you live in America, the winter period of months December through March can range from mild to average to horrible. In southwestern Missouri, we have a climate that could be called mild when compared to location to the north like Chicago or New York. Typically, it begins to get seriously cold here in my town of Forsyth right after or shortly before Christmas. The average high and lows for the year are shown in the table below. This table represents many years of record keeping by the National Weather Service in Springfield Missouri. A key figure to watch is the mean temperature which is the average of all the highs and lows for the month. Notice that for November the mean is a relative balmy 46 degrees Fahrenheit. One way to visualize a typical day in this month is to imagine an ideal day where the high was 56F. and the low was 36F. So, the days of November tend to be cool during the day while dropping to near freezing at night. Now in real life, the actual recorded temperatures will meander up and down the scale. You might have one day where the high was seventy followed by a cold front that comes through and drops the mercury to only 50F. However, when all is said and done, you will find that the average is pretty close to this mean figure by a degree or so.

Now, as you can see things get much more interesting in December and January when the average temperature is almost a full ten degrees colder each month! Along with the floor falling out of the thermometer, we also tend to get a mix of wacky weather. This is due to the fact that southwest Missouri is the geographic location where a number of climate zones (climazones) come together to make for some wacky combinations of rain, sleet, snow and ice. Of these, one of the most weird was so-called ‘thunder ice’ that occurs when it’s literately a winter thunderstorm that rains ice! A rare event for sure, but one that you will never forget if your unlucky enough to get caught out on a country road that quickly turning to ice. 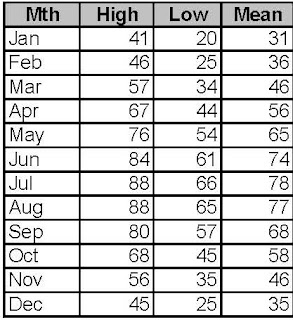 As if that were not enough, it can really get cold in these parts. In Warsaw Missouri in the middle of the state on February the 13th in 1905 the thermometer got all the way down to forty below zero! Now that’s cold. In 1903-04, one of the coldest winters on record were record here with an average three month high of 25 degrees! Just imagine going through that long a time period with the high temperature in the teens most days. Way back then,, most everyone heated their homes with wood and coal, so they didn’t have to face huge electric bills. Still, it must have been a nightmare to have lived through.
Can that sort of thing happen today? Sure! As a matter of fact we have a history of bad winter years that stretch back through time. Interestingly, the Farmer’s Almanac for 2010 which was just released is calling for a milder than usual winter for us here in southwestern Missouri while the east coast will see bitter temps while the north will get cold and snow and the west balmy temperatures with little rain or snow. So, we will see what we will see. The point is to make sure you are prepared, no matter what Mother Nature throws at you. That will be the topic of my next blog.
Posted by Dan Owen at 12:02 PM