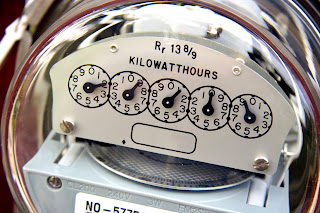 My purpose in creating this blog (Gods knows there are not enough blogs already) is to document my efforts to keep my energy bills as small as possible. No small task, as I have learned over the last year. But, with energy costs on a track to increase significantly over the coming years, I thought it might be fun and instructive to find out what works and what doesn't for me.

By way of background, I live in southwestern Missouri near a town known as Forsyth. A location that experiences a modified version of all four seasons. While our summer tend toward the hotter end of the spectrum, the winters tend to be mild and the spring and fall months delightful. On average my 1600 square foot home uses a two year average of 1,351 kilowatt hours of energy a month to run everything and to keep it warm in the winter and cool in the summer. The cost of this energy is currently at about ten cents a kilowatt hour having just experienced a 13.9% increase a couple of months ago. I think this still places my cost somewhere in the middle of the energy spectrum for what US citizens pay all across the continent.

At this site I have a weather station from Davis Instruments that does a pretty accurate job of tracking temperatures, winds and humidity. I mention this because outside forces can and do play a large part in terms of overall energy costs. This is especially true, in the winter, when I fight to keep every BTU I possibly can inside. The weather outside can and does have a huge effect on how much energy has to be added in order to keep the volume of space I live in comfortable.

During the course of this coming late fall season of 2010 and especially during the winter months, I have written a series of blogs that addresses my efforts to improve the efficiency of devices that affect my energy consumption and therefore my electric bill. While I do have a modest fireplace, I've already decided against using it as a thermal device (too small and way too messy). Instead, I plan to explore methods and devices that anyone can use to cut back on what they have to pay the electric company, while not having to shiver their way through the coldest months of the season.
Posted by Dan Owen at 8:29 AM