Just for fun, I thought to take advantage of a cool spell when the mean temperature was to run at about 42 degrees and perform an experiment. The day was clear with high pressure overhead and winds that were expected to come out of the northwest initially at 3-8 mph and then die down in the late afternoon and overnight. This would aid radiational cooling in the nighttime hours resulting in a winter like morning the following day.
In this experiment, I wanted to see how fast my house cooled down (or warmed up during the day) without the furnace on (TStat column) and whether or not I could save on electricity by heating just my bedroom with only a small 900 watt space heater. I tracked the information pertaining to this on a spreadsheet throughout the day and evening. Here are the results I obtained:

[click on to enlarge]
Technical -The area I heated, has a volume that of 1560 cubic feet. The space heater I used was a radiant element type made by a company named Lasko. It was set on low and put out about 600 watts of heat. It also has a crude thermostat so that once a comfortable temperature is reached; it will cycle on and off. Now this room also has a sliding glass door that is 35 square feet in area and a window that is about 11 square feet in terms of surface area. Both use thermopane glass, yet during the coldest part of the experiment, I could feel the cold if I held my hands close to the glass.
General Observations
I settled on a room temperature setting of between 69F and 70F as I find that to be a relatively comfortable climate. Once I had the space heater set properly, it worked pretty well and did maintain a room temperature that was close to the desired value (see data).

At around 2:30PM, I noticed sunlight coming in from the window that faces west. This added a significant amount of heat to the room as the space heater did not run for about a three hour period of time (note the increase in the room temperature).
As the evening approached, I could tell that this was a perfect scenario for a radiational cooling event! The temperature began to drop at about a 4 degree rate every hour. By seven PM, the winds stopped completely enhancing the effect.
Summary
Normally, when the mean temperature was in the forty degree range, my home had used anywhere from forty to fifty kilowatts of power. (That’s with the furnace set for 69F and when the usual stuff like TV’s, light and computers are running). In this experiment, however, I used only about 25 kilowatts* which is at least a forty percent decrease over whole house heating. Only about 4 kilowatts were used by the space heater itself. Now, the real test will come when it gets really cold as the other side known as Yang makes an appearance. In a situation where the temperature drops to say 20 degrees or less, I will have to make sure the house does not drop much below 58F so as to insure that no pipes freeze. This will mandate the furnace being on and running at some point during the early morning hours. Still, this should be an interesting test to see if a significant amount of power can be saved during really winter cold events.

* - In terms of actual power, the figure was closer to 12.1 kilowatts since I was running the furnace in the overnight hours prior to the experiment beginning (7AM reading of 24.5 minus the 7AM read of 8.4 on Oct 20).
Posted by Dan Owen at 7:44 AM No comments: 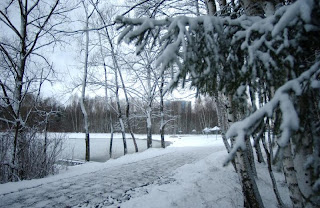 [click to enlarge]
As you can see by the graph, a typical day is likely going to fall somewhere inside the yellow box whereby the sum of the high and low for the day add up to 70 with the average being 35 degrees. This means then, that for most every day, the temperatures (usually at night) will drop below the 32 degrees. A point below which my heat pump works. In other words, pretty much the entire month will see the ‘emergency heat’ lamp on fairly often. This means that heating elements have been turned on in the furnace to provide heat which the heat pump is unable to provide.  When that happens, you can basically count on having a high electric bill by month's end.
So, a month like December (and January and February, for that matter) are going to cost you quite a bit unless you can figure out a way to beat the ‘physics of the situation’. In my view, there are three ways to accomplish this on a realistic level; one, move to Florida for the winter, two, you can move to a basement (if you have one) where you’ll be able to utilize the buffer that is the earth to lower your heating costs, or three, you can employ the use of space heaters in only the rooms you absolutely need to occupy while setting the furnace stat to a lower than normal (say 60F) temperature setting. Then, hunker down and think plenty of warm thoughts! For anyone that might be interested, here is a graph I constructed that allowed me to estimate the electric power I would likely be using for a given mean temperature. This assumes that the furnace is heating the whole house! It worked surprisingly well: 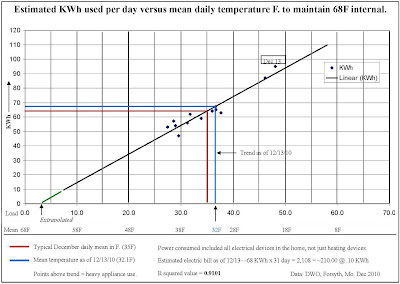 
As you can see, if I am experiencing a mean temperature outside of 35F. (red line), then I can expect to use somewhere in the neighborhood of 65 kWh of electricity. I can control this figure to some extent by cutting back on an unnecessary use of power like the TV, radio, etc. Also, if the sky is sunny, I can open the drapes and catch a little heat that way. But other than executing the 'basement' alternative, I'm pretty much stuck!

Well, that's my plan for this winter! I'm hoping for a wet and snowy one as that will ratchet up the mean temperatures quite nicely.
Posted by Dan Owen at 10:43 AM No comments:

Heating a house just one degree!

Here’s a graph of the power needed to raise the temperature in my home from 68F to 69F that was part of an experiment just prior to the heating season for 2011. Notice the second stage kick in? It also too half an hour to accomplish the feat! It’s early October and the temperatures in the mornings are only dipping down to the low forties. So for now, I can get along with very limited use, but come November I’ll have that baby cranking pretty much full time!
Last winter, I had the thermostat set at 69F and was able to live with that as long as I had a couple of space heaters going in key rooms. The wintertime is by far the most expensive season in terms of electricity used. Here is a list of the power used lat season starting with November:
Nov 2010        1734
Dec 2010         2282
Jan 2011          2049
Feb 2011         1359
Believe it or not this was much better than the season before by about 15%. I think the reason for this is that heat pumps become less efficient as the outside temperatures get much below 32F. More and more often then the ‘auxiliary’ or ‘emergency’ heat kicks on which are a set of heating coils in the furnace itself. This form of heat is much less efficient and can really racks up the energy cost. However, if you are selectively heating some rooms with portable space heaters, you are helping to actually reduce your overall heating bill. That’s my theory anyway.
This year, some weather watchers are forecasting colder than normal temperatures. If that happens, I will be able to see how well I do.
Posted by Dan Owen at 6:40 AM No comments:

Using space heaters to save on heating costs. 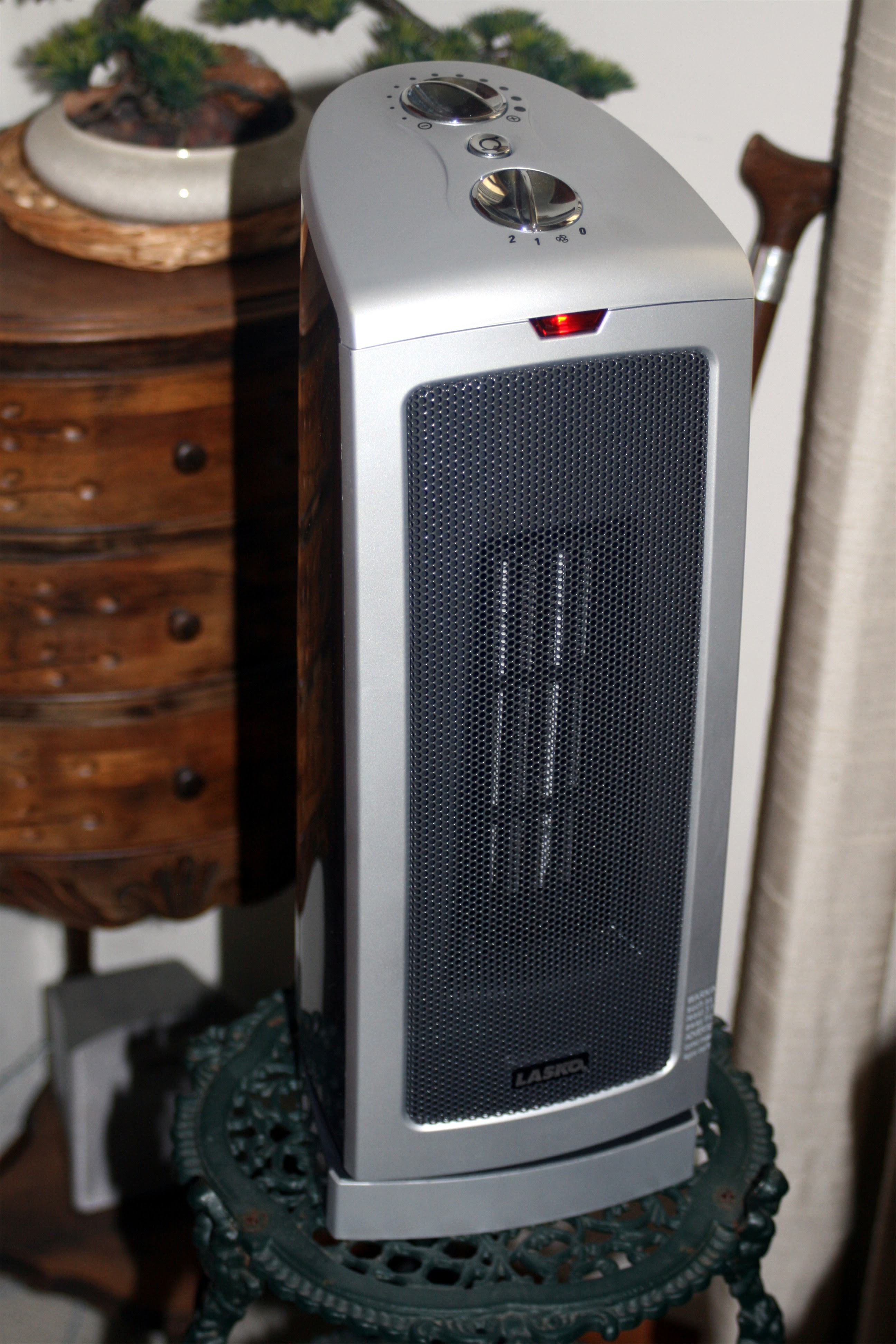 If you’re a person that hates paying high electric bills, then the later fall months are the best in that regard. I’ve been able to go for half of September and all of October so far with both the AC and furnace turned off. For those occasional cool mornings, I’ve bought a couple of space heaters which are doing a nice job so far. I have one in my bedroom and one in the living room. At this time, I’m turning them on manually but plan to get a couple of timers so they can be set to turn on at about 4AM.

The jury is still out as to how effective these devices are in reducing heating costs. To that end, I’m planning on performing a little bit of research this coming winter to find out. Right now I have two types of heater; a resistive element type and a ceramic heater. Within the next couple of weeks I plan on purchasing an oil filled radiator type to round out the selection. These will be strategically placed in the house and timed so they turn on early to bring select areas up to 72F. The central furnace will be set for 60F. I will then watch to see how much I suffer, and or, how much electricity is saved…or not. This effort will more than likely end up as a You Tube video at some point.