In a never ending effort to save a watt here and there, inevitably I run into situations involving winter weather and how to get through them in a warm fashion. Warm, that is, as in not breaking the bank!

Since I'd recently moved to a single bedroom condo and had shed myself of a much larger stick built home, I was hoping the move would also translate into some energy savings. although, I'll admit that the presence of two large sliding glass doors gave me some pause. I knew from experience that the large expanse of glass could translate into huge amounts of heat loss. Not only because of the glass, but also because the seals around them are notoriously leaky, a fact that was born out when I checked them in the fall. I could actually feel air flowing in around the base of each!

As fall moved into winter, I elected to try and seal the base of one of the two doors with good old duck tape. Surprisingly, that worked to some extent! I also purchased a 3M film package large enough to cover one of the doors, figuring that if it worked, I could then go forth and cover the other door. But, before doing that, I wanted to establish a baseline of sorts to see just how large the thermal gradient was between the windows and the rest of the living area they were located in.

I placed two temperature sensors by the base of each door and then situated another towards the back of the living room. All three were wireless and so I was able to monitor the readings from a warmer location. For this test, the furnace was set down to 61F on a night where the high and the low was about 32 degrees.

The results of this impromptu experiment, are shown in the graphic at the start of this post. As I expected, the two glass door areas were definite heat sinks coming in at a steady 50 degrees when the outdoor temps were just at the freezing mark. Interestingly, however, the loss oh heat from the total area was very slow and as a result my furnace never kicked on during the test period. As a result, I was able to survive the night in some comfort (aka my bedroom with a space heater) for just 30 kWh's of power used.
Posted by Dan Owen at 7:14 AM No comments: 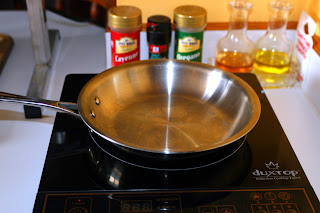 Every once in a while, even a slow person like myself stumbles on something that works a lot better than what was working for them before!

Since I began using a Duxtop induction stove top along with a Calphalon 10” stainless steel frying pan and Le Creuset two quart round Dutch oven, I've been a happy camper! Between these three kitchen items, I've been able to make most of my meals without having to resort to using the stove top at all!

I got hooked on the induction cooking concept when I learned that not only was the temperature control very precise, it was also extremely efficient power wise. How efficient? Well the previous month I used only 5.0 kWh or about sixty one cents worth of power to make almost all my meals. Between the Duxtop and the microwave, which used about 5.5 kWh's, my total for cooking for the month came to just $1.26!

That was last month and I had not answered my need to cook 'oven type stuff', deferring instead to visit fast food emporiums. So, this month, I added another great watt killer device known as a Breville convection oven to round out my occasional need for baked, roasted or seared food. As of December the 8th, and after baking numerous chickens, baked potatoes and cookies, I've used a mere 3.27 kWh's or about forty cents! If I were to trend these three appliances out; my total electric cost, for a whole month, would come to 23.6 kWh's! That's a minuscule $2.89 for the entire month and we're talking three course meals, each and every day!!
Posted by Dan Owen at 8:48 AM No comments:

Sure! It's only barely the first week into December 2015, but that's OK. I'll take whatever 'Global warming' old Mother Nature decides to throw my way...

The graph of electric energy use above is a little deceptive. Last year I was in a much larger stick built home which currently I'm living in a one bedroom condominium. Having stated that, the savings have been rather impressive this year! At the time of this post (December 8), the National Weather Service was calling for mild conditions to continue into the near term. As I am located in SW Missouri near the Arkansas border, this is really good news. For us, most winter cold spells with precipitation translates to some form of ice!
Posted by Dan Owen at 7:13 AM No comments:

And so the winter cool down begins! 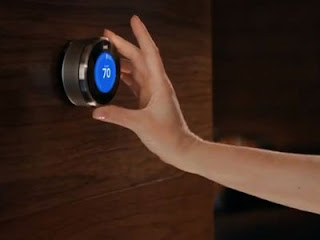 As we pass by the portal of time that is called December the 1st, we can almost see the sun arcing lower in the southwestern skies each day as that day becomes a little shorter. Many species of birds and animals know that it's time to head south into warmer climes for the next three months while winter rages around the northern hemisphere. Us humans, well, we aren't so smart all the time!

So, come December, many of us are stuck with dealing with whatever the coming winter deals out. And, it generally gets colder and colder and colder. But, that's not always the case. December 2014, for instance, was one of the better early winter months that I can remember! For one thing the month was 4.4 degrees above normal. And, while the nighttime temperatures did get down to the 30's on a regular basis, there were only nine days where we say the 20's and they were the high 20's at that! Rainfall, and most definitely snowfalls were few and far between. Actually we did get 2.8 inches of rain and zero inches of snow! That put us 2 inches down for the month, but it really wasn't a big deal as we more than made up for it in the months that followed. Electrically, my home used a whopping 500 less kWh's when compared to the year before! And, those savings really helped me out!

So, for me it's all about the average temperatures and exactly where they go. December typically sees a monthly average for the highs and lows at about 35ºF, down where I live in southwest Missouri. Then, January slams in at an average of 33 degrees with February moderating only a bit up to 28! Heating my humble adobe, at an average outside temperature of 33ºF, translates to an electric bill of about 1200-1800 kWh's. At 13 cents per kilowatt hour that amounts to $156 to $234! Let me tell you, getting hit, in that manner, for each of those three months really mounts up for a person living on a fixed income as I do.
Posted by Dan Owen at 9:30 AM No comments: