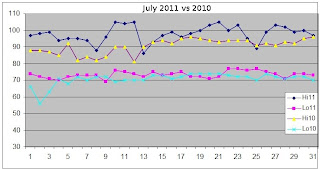 The graphic represents the temperature range that has existed in and near Forsyth Missouri during the month of July 2011. The data is from the first to the end of the month for the graph above. During that period the majority of high readings were at or above 90F with the red line representing 95F. In addition, eight of the days were one hundred degrees Fahrenheit or higher.  When combined with nighttime lows that often never dropped below the mid seventies, the end result was a classic heat wave scenario. This kind of heat, especially when combined with little rainfall (less than half an inch) made it very difficult for both animals and plants. It was also a time of stress for the central air conditioner in my home. 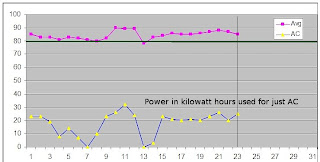 The chart here shows a couple of interesting tidbits of information. Displayed is the average temperature for each day and below that the amount of energy that was used for air conditioning. As you can see when ever the average temperature reading ran at 80F or higher there was a corresponding dramatic rise in energy usage. The total for the period through the 23rd was 410 Kwh or about $38 worth of electricity.

As a final thought, apparently the local Electric Coop (Empire) is also struggling with heat related problems. They have experienced a record seven outages in my area over the last few weeks with the worse one lasting more than two hours yesterday evening. Whether the outages are due exclusively to the heat remains to be seen. It's also possible that aging infrastructural problems may be plaguing the company.
Posted by Dan Owen at 8:29 AM