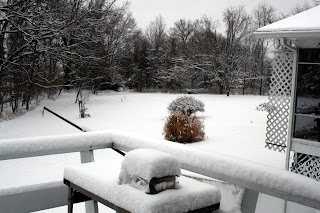 January 2011 is now safely tucked away in the meteorological history book. Here in southwest Missouri, we had one good snowfall. It was about three and a half inches and occurred on the twentieth of the month. The mean temperature at 31.7F was a little above the average of 31.4F. Precipitation was lacking, however, as I recorded only .38 of an inch against a thirty year average of 2.6 inches (West Plains Missouri data). So, a pretty much ho-hum month against a background of chaotic events world wide.

Gasoline hit the $3 mark, locally, for the first time since 2008 as unrest in the middle East (especially Egypt) continued to cause uncertainty in the markets. Unemployment continues to be somewhere between nine and fourteen percent depending on who you believe. Add that to rising food costs, a deadlocked government and the increasing prospect of a caliphate in the Middle East and you get a sense of the times.

On a happy note, my electrical use dropped 26% when compared to the last couple of January’s. I attribute the decrease to some of the simple things I did to prepare the house for winter (see previous blogs) and to the fact that the month was pretty much normal temperature wise.
Posted by Dan Owen at 8:07 AM No comments: