When nature goes on a rampage, be prepared! 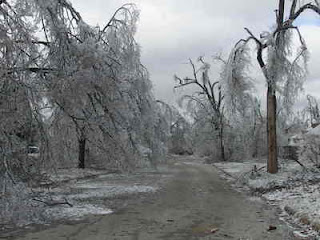 Of all the forms of weather we see here in southwest Missouri, I think it’s the potential for ice storms that instill the most anxiety and fear. While tornadoes can cause more damage, they tend to come and go in moments. Icing events can occur over large periods of time, trapping all who are caught wherever they happened to be at the time. If the icing gets bad enough, the trees will begin to lose branches which fall onto power lines. (I’ve been through a storm like that and it’s no fun). Pretty soon there is no power and sometimes the outages can last for days or even weeks. (Many people who live in Springfield can attest to what it’s like to not have power for more than a week)! On January the 13th 2007, a storm left a broad swath of ice over an area that included the city of Springfield.  It left over 200,000 southwest Missourians without power and a landscape that resembled a war zone. That scenario may well play itself out yet again for towns south of that city if the worst case occurs. I live in a location that is just south of the city and which is smack in the middle of the area that may see problems. 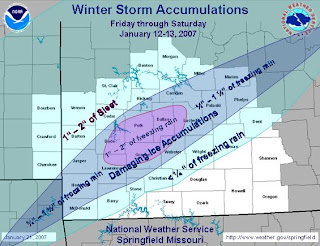 So, I thought it might be a good idea for me to take stock and to have a plan if the power goes out and stays out sometime over the next few days. In all likely hood, nothing is going to happen. The storm may just dump some sleet or snow or perhaps nothing but a rain shower or two. You just never know, but I can tell you from long experience, it’s those times when you don’t plan that catch you napping.
This year, I have a small generator that is just big enough to run a small heater, a lamp and a deep freezer. Since I have a finished basement, I would move down to it in the event of a power outage where I can easily heat an area that is always at about 65F. I also a small deep freeze down there, and so would have a way to keep some of my food from rotting. Rounding out my survival gear are a couple of Coleman stoves, sleeping bags and other assorted stuff I normally have for camping out during the summer. I also have a large stash of candles for emergency light. The storm is supposed to hit us on Tuesday, so on Monday I plan to visit a grocery store, fill up on gas, buy food that’s easy to prepare and stock up on batteries for portable radios and flashlights. Since I know that the weather is forecast to warm up to forty degrees two days after this event, I also have an idea of how long I would have to hold out even if we get four or more inches of ice.
By having a plan and working it, anyone can get through bad times. A plan that will work for not only ice storms, but also for other kinds of disaster where the services we all count on can be interrupted.

Now, that I’m ready for bear, I can bet you all that absolutely nothing will happen and that's just fine by me!
Posted by Dan Owen at 2:20 PM No comments: 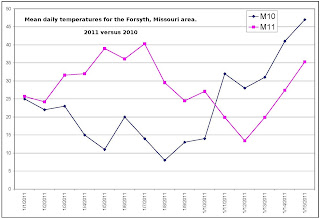 [Forsyth Mo.] – January in southwest Missouri is normally moderately cold with a mean average temperature of 31.4F (West Plains 30 year data). We also normally about 1.31 inches of precipitation. (Data for West Plains)
So far this month, through the 15th, the Forsyth area was colder than normal with a mean temperature of 28.4 F (3 degrees below normal) and just two tenths tenth of an inch of precipitation. Unlike both coasts which have been hammered by the elements, it has been an uneventful winter here so far. You don’t have to go very far back in time, however, to know that ice storms can be our Achilles heel. We still have a lot of winter to go yet.
So, while we are just a month, figuratively, into the winter season, it’s been a pretty good ride. I only hope we get some more water before the end of the month.
My heat pump seems to quit at 30F!
As long as the outside temperature is above 30F my heat pump works pretty well. But, once a real cold spell sets in, I’ve noticed my heating costs have soared. The unit runs continuously and then at some point, gives up and kicks in the auxiliary heat which actually does warm the house. Auxiliary heat is also known as emergency heat and involves the activation of heating strips in the furnace itself. This is a rather inefficient process and one that uses up a lot of electricity. I think even baseboard heating would be better during really cold spells.
Overnight on January the 12th, the outside temperature got down to the low teens (see graph). This was combined with a cold day to bring the average temperature down to 13.4F. As a result the heat pump was on continuously and was able to maintain an indoor reading of 70F only by cycling the auxiliary heating coils on and off. In the graph the line just below the 70 degree mark was the actual core temperature of my house. The ‘load’ figure is derived from subtracting the ‘core’ temperature from the average outside temperature. Even a small increase in load factors above 40 degrees results in an exponential jump in kilowatts burned.
If I see a prolonged cold spell coming, I might just elect to shut down the house, turn the thermostat to 56F and go stay in a cheap hotel room for the duration. I think it would almost be cheaper that way.
Posted by Dan Owen at 6:39 AM No comments: 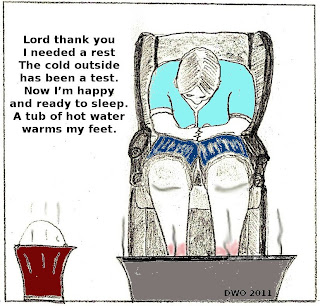 Typically, about this time of year (January) in southwest Missouri, I begin to internally grouse about how cold it’s been. It’s 21 degrees Fahrenheit this morning and my body is now set on low shiver. (While trying to save a little energy, I’ve set my thermostat down to 69F in early December and that’s pretty much where it’s been at ever since). Let’s see air temp is 69F, body temp is 98F. What’s wrong with that picture? To keep warm, I have a couple of strategically placed space heaters that have already seen quite a bit of use. I generally have one close to my feet, which are cold most of the time even with socks on.
When I get to feeling really blue, like I am today, I go on the internet to see how cities to my north are faring. They say misery loves company, especially if that someone is more miserable than you are! So, I look at a map and right away I feel much better. [Silent cackling] Minneapolis is in the negative digits at just a few degrees below zero. My Gawd, Fargo, North Dakota is at fourteen below. Wow, I’m feeling so much better now.
Cold, I will assume, is more or less a state of mind. That is, until hypothermia sets in, and then you have some real problems. My current state of mind is somewhere between ickythermia and happythermia. It's leaning more to the former as the weather lady on TV just informed me that things are going to get even more dicey early this coming week (January 11th and 12th) with forecast highs in only the upper twenties and lows hovering close to or below zero. Bout time I looked for that old pair of thermal underwear, I guess. I haven’t even bothered to see what’s going to happen to the folks in Fargo. What do you call a frozen man in that city...a Fargosickle of course!
On a brighter note, this will be an excellent opportunity to see how well my winterized house holds up against some truly cold conditions. My heat pump will just have to content itself with running almost entirely in ‘auxillary mode’ which is double-speak for ‘this is an f’ing emergency mode’. Were I of the mind, I would take that opportunity to watch the little metal disk on the electric meter go nuts. I won’t, but I do intend to call my local power cooperative to see if they might need some more Champagne! I guess it’s the best of both worlds when you can crank the heat up to your hearts content and get paid for it all at the same time.
Posted by Dan Owen at 7:31 AM No comments:

Blocking windows with a blanket! Was it worth it?

While think tanking back in November over a few bottle of beer, I came up with the idea of covering my sliding glass doors with large bedspreads to aid in keeping out the cold (see A Blanket Experiment). I am now prepared to report on my preliminary findings for the month of December 2010.
My findings were….inconclusive. While the covers did add a bit of panache to the over all theme of my home (my neighbors like to stand outside pointing), it is questionable as to how effective they were at hold in the heat or in keeping out the cold. In order to better quantify the results, I’ve elected to take the blanket off my bedroom sliding glass door for the month of January 2011. Hopefully, after taking temperature reading for an entire month I’ll be able to see if there were any savings or not.
I have also applied for a government grant by submitting a paper entitled “Scientific study of thermal gradients using polyester as a barrier device.” I asked for $500k to fund both the study and my beer chest.
Posted by Dan Owen at 7:02 AM No comments: 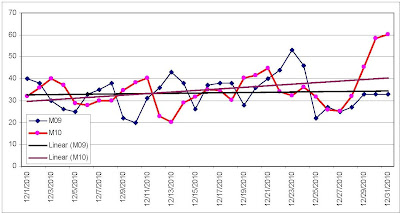 "Yes I'm stuck in the middle with you,
And I'm wondering what it is I should do,
It's so hard to keep this smile from my face,
Losing control, yeah, I'm all over the place,
Clowns to the left of me, Jokers to the right,
Here I am, stuck in the middle with you."
When I think about December 2010 here in southwest Missouri, I’m reminded of that old song called ‘Stuck in the Middle With You’. While December saw numerous winter storms rage on both sides of the nation, most of us in the middle states were left a bit cold and dry.

While some areas recorded over an inch of rain for December, my gauge only showed .30 of an inch. In a month that would normally see three inches, that pitiful amount just didn’t cut it. We seem to be trending in the direction of a drought. I sure hope 2011 proves me wrong on that score.

The average mean temperature for the month was 35Fis pretty much what we have been getting for the last thirty years. As a result, my energy use was also typical at about 63 KWh per day. This represents about a 13% improvement in energy savings over the previous two years, all things considered.
Posted by Dan Owen at 6:19 AM No comments: