Dec 18-19: Down here in southwest Missouri, an arctic incursion really smacked it to us with an average temperature of about 16 degrees! The translated into 61 kWh's of electricity I had to use to keep my modest adobe warm!  In the chart above, you can visualize just how far from the 'norm' that temperature reading was!
Posted by Dan Owen at 3:48 AM No comments:

The first arctic outbreak of December 2016! 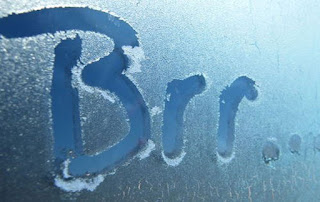 Forsyth Mo. - All over the news, recently, was a forecast of arctic air that was scheduled to slam into the Taney County Missouri on or about December 7. The forecast sounded serious as the weather service was calling for some morning temps in the lower teens! This from the National Weather Service;


'Overall, it looks like winter will make its first real appearance to the Ozarks over the next week to 10 days.'

My thinking at hearing that news was how I would face the challenge of keeping most of that cold air at bay. I was living in a condo located on at the end of a building on the top floor of a four floor structure, and so my unit would be exposed to the elements from a number of sides. Sure, my building was well insulated, but still there were areas of concern...

For instance, there were two sliding glass doors that lead out to my balcony. They were built in 1991 and were showing their age, as air leakage was a problem. That area was located in the living room, and so I decided to set the furnace on a low setting (60ºF) and then retreat to my bedroom office during the worst of the weather. That location offered a much smaller volume that I hoped to heat adequately with a small space heater. The lone window, in that room, was also treated with a collection of cardboard boxes that would supply some dead air space along with R-values of about 3. That should help a lot, I figured. At least that was the plan....

Last January, when it got cold, in a similar fashion, I used about 45-55 kilowatt hours of electricity to maintain my unit at a livable level. Back then, I have daytime temps in the low 30's while overnight temps got down into the teens! And, as a senior living on a fixed income, I really needed to try and keep those electric bills under some kind of control!

I hope to update this post, beginning December 7 when the weather turns colder.Be sure to visit my weather site at www.taneyservices.com for more real time weather data!
Posted by Dan Owen at 7:44 AM No comments: