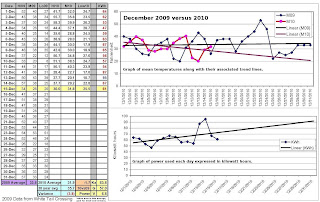 Forsyth, Mo. -  My intent is to post temperature information I have been gathering as part ongoing research for a book on home energy saving practices due out sometime in March 2011.

The graph displayed above represents temperature data taken for my home here in southwest Missouri. The data for the previous year of 2009 was gleamed from a fellow weather watcher over in White Tail Crossing, a location just to the north of Branson, Missouri.
The major difference between last year and this year is the fact that temperatures, on average, have been much lower than they were in 2009. This is true, at least through the first two weeks of the month. Plotted in the graph above are the mean temperatures for each date which represents the average of the highs and lows for that twenty-four hour period. (I posted these and not the actual highs and lows as they are more indicative of trend analysis. The actual values are posted on the left side for anyone who is interested).
As you can see this year’s average temperature, through the middle of the month, is 3.8 degrees Fahrenheit colder the thirty year average. I think for there to be any significant difference of more than say a tenth of a degree when compared to thirty previous December is significant in and of itself. (Whether this is indicative of a long term change, a blip or one that will average itself out over the balance of the month remains to be seen).
Likewise, the energy used to heat my home is also trending upwards in line with the colder air outside. Last year, I used 2,074 kilowatt hours and the year before that (with the average mean temperatures close to normal) 1,878 KWh. This year, in spite of efforts to better insulate my home, I am trending to come in at 1,978 KWh (63.8 times 31 days) which would only be marginally below last year. Colder than normal months can be significant to anyone on a fixed income when considered on top of a 13+ percent rise in the cost of electricity we received in my county earlier this year. (As a side note, the Springfield weather office is reporting an even larger seven degree mean temperature variance this year versus average).
Precipitation for most of the Taney county-wide area has also been a little sparse. Most sites have recorded around a tenth of an inch or less since the first of the month. In a normal year, we should see somewhere between three and four inches,
The bottom line, so far, is a month that is colder and dryer than usual. However, the weather service is hinting at a moderation of temperatures for the later weeks of this month. Now if we just get some rain!
Posted by Dan Owen at 5:47 AM