I finally go around to tabulating the results of my energy savings program’s effectiveness for the year 2010 compared to 2011 when many of the changes were put into place. I think it is apparent that this program was successful and I hope to continue to explore other ways to save a watt without sacrificing comfort or convenience!
Posted by Dan Owen at 9:39 AM No comments: 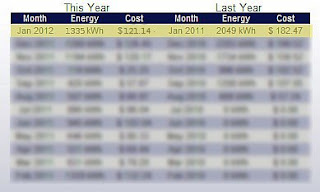 Actually January was a great month for me, energy wise, not so much because of anything done on my part, but rather due to the relative warmth. January was over seven degree warmer than the average and that play very well when it came time to pay the electric bill for the month.

In 2011 my bill was $182, and this year, it was all the way down to $121! That’s actually a thirty plus something savings as my rate was increased 13% this year versus last. Now, with the weather forecasters anticipating a warm February, I’m hoping to have done rather well for the entire winter season!
Posted by Dan Owen at 7:57 AM No comments: