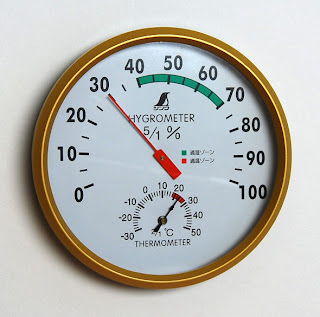 Although much has been said concerning ways to maintain the heat you pay so dearly for in the winter months, don’t overlook another key factor. Maintaining acceptable levels of humidity can not only lower heating costs, but can also be a big player where your health is concerned. Go out and get a few hygrometers!

Everyone should have an accurate meter to measure the relative humidity in their homes. These devices, also known as hygrometers, are relatively cheap to buy. So much so, that you might want to consider getting one for each major room of your house. The better quality devices can be calibrated once a year or so to insure accuracy. This can be done by taking a sealed container, a bowl of salt water and the hygrometer and placing both into the container in a room away from heat or cold sources for ten hours. After this amount of time the reading on the hygrometer should be 75% relative humidity. If it's not, then adjust it and you're good to go.
What is relative humidity you may well ask? Well, in simple terms, it is a measure of the amount of water vapor that a given volume of air can hold at a given temperature. It is usually expressed as a percentage with 100% indicating that the air is fully saturated. That is, the air can hold no more moisture and if you were to change the temperature, even a little, downwards fog would form. That’s because droplets of water would begin to precipitate out in order to maintain the equilibrium. Now, no one would want that much moisture in their homes. The walls would be dripping wet. As a matter of fact, anything over 50% R.H. is considered high as molds, fungi and dust mites will begin to multiply rapidly. Also, if you're sensitive to allergies, then this would not be a good thing. At the other end of the spectrum, as during the really cold months of the year, the air can get so dry that it causes symptoms like sore throats or itchy eyes. This would happen if you allow the moisture to get much below 30%. Therefore the ideal range for most people would be readings somewhere between 35% and 45% relative humidity. You see? These devices can be handy to have around.
When the air gets too dry it also takes a higher thermostat setting to make you feel as warm as you would if the humidity were higher. This can result in higher heating costs and unhappy family members. So, if your humidity readings are consistently on the low side of 35%, then an easy solution is to purchase one or more good quality humidifiers. I would even go as far as to suggest having one in each major room. Then, in conjunction with you strategically placed hygrometers, you can properly manage this very important aspect of your home environment.
Posted by Dan Owen at 2:46 PM