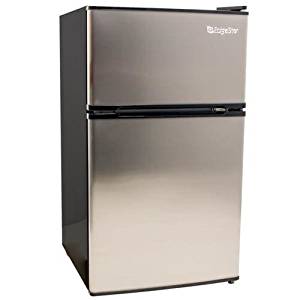 After doing a casual review on the EdgeStar CRF321SS 3.1 Cu. Ft. mini fridge with freezer, I decided to get some hard data for anyone who might be thinking to plunk down the money to purchase one. So, here is some of the data I gathered....

Observation dates: October 24-26, 2017
Ambient room temperature ~ 76 - 80ºF.
Sensor: EL USB-2
Power use: Kill A Watt Electricity Usage Monitor
For the period of the experiment (18 hours for the Freezer), I accumulated the following information:

FREEZER: I placed the USB sensor into the freezer at 3:20 PM CST and got the following readings. Note that while this was not a true scientific styled test, I do feel it did represent the kind of performance that customers could expect.... That said, I did take note that the average temperature was 7.5 degrees Fahrenheit. That was above the recommended setting of 0 degrees, but since I rarely keep foods frozen for very long, it was not a big concern for me... Update: Here was the result (the next graph was after a minor setting adjustment): 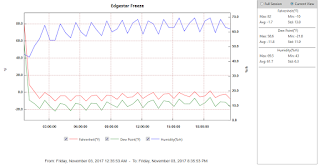 REFRIGERATOR: After measuring the data for the freezer, I then placed the sensor in about the middle area of the refrigerator and recorded for 24 hours. Unlike the freezer, which was not opened during the period of measurement taking, I did open the refrigerator fairly often to retrieve food and beverages. Hey, I'm a thirsty sort of guy!

I was somewhat surprised to see the average temperature of 44.5F! But, I was also not too concerned as I use this fridge to cool bottles of water, V8 and Dole peach cups! Having said that, I did up the cooling dial a bit. It had been centered on medium cool in the past. After doing that and remeasuring, I got this data report:

POWER USE: After the 24 hours testing period had elapsed, I had recorded power usage at a total of 0.40 kWh's. That averages out to about .0167 kW's per hour for an estimated cost of .002 cents. (I was using using the .13006 rate that Empire Electric charges for electricity, where I live in southwest Missouri). Doing the math, I would expect the monthly cost for this Energy Star appliance to be at about $1.56! Not too shabby!

NOISE LEVELS: Finally, I used a sound app to get an idea of the decibel level of this unit when it was running. It turned out that I got about 28 decibels, or the sound level that rustling leaves would make! Not bad....

BOTTOM LINE: Since June 2017, when I purchased this unit, I've been extremely happy! www.taneyweather.com

Well, it is spring, and storms do come a knocking! 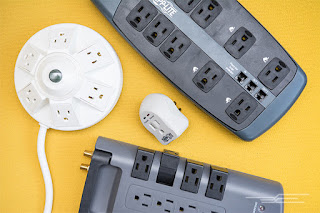 Taney County MO – The National Weather Service is calling for the potential for severe weather from Wednesday, April 25, on through the coming weekend, several days later! That is noting unusual, and if your electric coop has buried your power and communication cables underground, it should be a non event. For those whose cables are hung on poles, rapid power fluctuation and sudden spikes from lightening bolts could destroy some of your expensive electronics! At the very least, power surges will shorten the life of sensitive equipment!

Ten years ago, the probability of any real harm from lightening was a lot less, as most people had little in the way of sensitive equipment to worry about. Today that isn't the case for many! In my home there are tablets, multiple computers, cellphones, digital TV and a host of other devices that depend on circuit boards in order to operate! Even a surge protector may or may not save them from a close-in strike! So, it pays to be weather aware and to perform a few simple steps to make sure that the storms come and go without incident.

Lastly, encourage your city and local electric company to invest in underground runs that will make everyone's life a whole lot more enjoyable!
Posted by Dan Owen at 11:08 AM No comments:

Empire Electric and their raised rates!

Taney County MO – Recently I noticed that some of my fellow county citizens were complaining about their electric bills, citing large apparent increases. I investigated this and found some potential reasons why their bills may have jumped!


In addition, the temps from January 1 to January 16, 2016 were also on the warm side of history reading almost five degrees above what is normal! So, one would think that my bill would be a little lower than last year, wouldn't one?

Interestingly, the kilowatt hours used were greater than the same period last year which further exacerbated a bill that had seen significant rate hikes! Is there something wrong here? Yes, I think that there is! Below is a direct comparison between 2016 and 2017 billings: