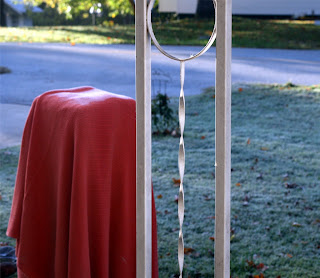 Just for fun, I thought to take advantage of a cool spell when the mean temperature was to run at about 42 degrees and perform an experiment. The day was clear with high pressure overhead and winds that were expected to come out of the northwest initially at 3-8 mph and then die down in the late afternoon and overnight. This would aid radiational cooling in the nighttime hours resulting in a winter like morning the following day.
In this experiment, I wanted to see how fast my house cooled down (or warmed up during the day) without the furnace on (TStat column) and whether or not I could save on electricity by heating just my bedroom with only a small 900 watt space heater. I tracked the information pertaining to this on a spreadsheet throughout the day and evening. Here are the results I obtained: 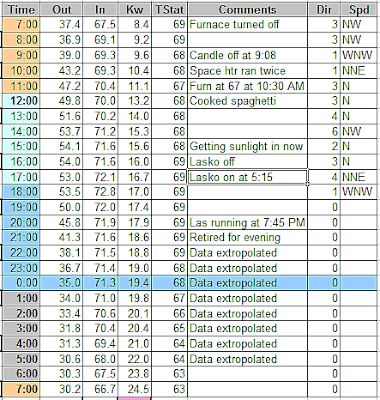 [click on to enlarge]
Technical -The area I heated, has a volume that of 1560 cubic feet. The space heater I used was a radiant element type made by a company named Lasko. It was set on low and put out about 600 watts of heat. It also has a crude thermostat so that once a comfortable temperature is reached; it will cycle on and off. Now this room also has a sliding glass door that is 35 square feet in area and a window that is about 11 square feet in terms of surface area. Both use thermopane glass, yet during the coldest part of the experiment, I could feel the cold if I held my hands close to the glass.
General Observations
I settled on a room temperature setting of between 69F and 70F as I find that to be a relatively comfortable climate. Once I had the space heater set properly, it worked pretty well and did maintain a room temperature that was close to the desired value (see data).

At around 2:30PM, I noticed sunlight coming in from the window that faces west. This added a significant amount of heat to the room as the space heater did not run for about a three hour period of time (note the increase in the room temperature).
As the evening approached, I could tell that this was a perfect scenario for a radiational cooling event! The temperature began to drop at about a 4 degree rate every hour. By seven PM, the winds stopped completely enhancing the effect.
Summary
Normally, when the mean temperature was in the forty degree range, my home had used anywhere from forty to fifty kilowatts of power. (That’s with the furnace set for 69F and when the usual stuff like TV’s, light and computers are running). In this experiment, however, I used only about 25 kilowatts* which is at least a forty percent decrease over whole house heating. Only about 4 kilowatts were used by the space heater itself. Now, the real test will come when it gets really cold as the other side known as Yang makes an appearance. In a situation where the temperature drops to say 20 degrees or less, I will have to make sure the house does not drop much below 58F so as to insure that no pipes freeze. This will mandate the furnace being on and running at some point during the early morning hours. Still, this should be an interesting test to see if a significant amount of power can be saved during really winter cold events.

* - In terms of actual power, the figure was closer to 12.1 kilowatts since I was running the furnace in the overnight hours prior to the experiment beginning (7AM reading of 24.5 minus the 7AM read of 8.4 on Oct 20).
Posted by Dan Owen at 7:44 AM