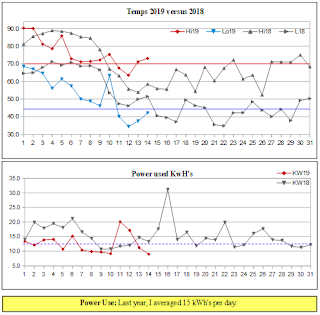 Looking at the temperatures in 2018, you can see that things took sort of a mini dive towards the end of October in 2018. Interestingly, while the 30 year average high and low was 70°F and 44°F respectively for October, I came in at a tad warmer at 70°F and 51°F. (That averaged out to 60°F which was about 3 degrees warmer than the normal of 57°F).  My best guess is that I will end up at about the same level which will translate into a $66 electric bill from Liberty Utilities.
Posted by Dan Owen at 9:06 AM