Last night (Oct 18), I endeavored to record various temperature readings with a mind to track energy use on a night where outdoor readings approached the upper thirties. For the experiment, I used a Meade wireless station that had two remote sensors; one placed outdoors and one placed in my living room. I was thereby able to record the temperatures of three areas; my bedroom where the master unit was, the outdoors and the living room on an hourly basis from 4:00 PM on Friday October the 18 to 9:00 AM the next morning. I was curious to see what amount of power would be required to keep my bedroom in the mid seventies via the deployment of a Delonghi space heater. During this experiment and even though my whole house Nest thermostat was set to a threshold heating of 68°F., the furnace never kicked in even though the readings in the living room were clearly below that level. I'm 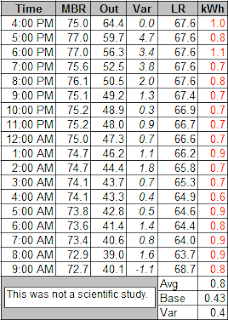 guessing that the reason was due to the more isolated position of the hallway where the thermostat is located.


The base electrical use for my home with the various background devices in use is approximately 0.427 kWh. This figure includes two computers that run 24/7 in my bedroom and which do supply some residual heat as a result. The other main contributors are the water heater which cycled on and off three times (see graphic) and the refrigerator whose power consumption is too low to appear on the power graph due to the scale of time. So, as you can see, the average amount of electrical heat energy needed to keep my bedroom in the mid seventies was about .400 kWh which equates to about a dollar and change over a full day of heating (.4x24=9.6 kWh x 0.1149 cents per kWh = $1.10).

To put this mess into some sort perspective, my electrical use went from about 13 kWh for an average day with no auxiliary heat to about 21 kWh with it. (This extra heat was needed to offset a mean temperature of 49 degrees outdoors which is not too far distant from what I am hoping will be the mean temperature for a much warmer than normal November). I base this assumption on the fact that the average power consumption for the past two Novembers was 621 kWh or about 20.7 kWh of electrical use per day. So rather than the historical average temperature of 46.8°F (West Plains MO data), I am hoping for a few more mean degrees warmer. [Note: There are numerous flys in this ointment of my reasoning which I will address in a later posting].